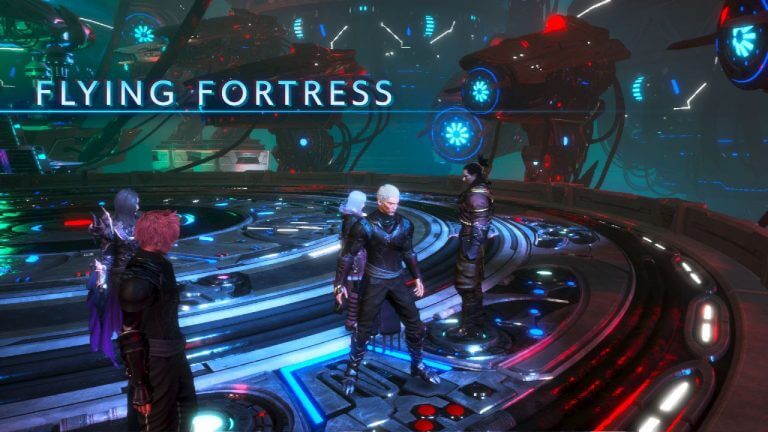 Stranger of Paradise: Final Fantasy Origin is a prequel to the original Final Fantasy, taking place in the same world. If you’re familiar with that game, saw any of the marketing, or have looked at SquareEnix’s merchandise lately, it’s pretty obvious where this plot is going, but I’ll do my best not to spoil anything in case you aren’t. While the story is not the focus of Stranger of Paradise.

Final Fantasy is one of the most iconic franchises in the gaming world, being a reference as an RPG for many years. There are more than 15 canonical titles in which the franchise, created by Hironobu Sakaguchi, has been reinventing itself and several spin-offs ranging from music games to Battle Royales. This is the case with Stranger of Paradise: Final Fantasy Origin, a spin-off resulting from the partnership between Team Ninja and Square Enix. The game seeks to retell the story of the first title in the franchise in a very original and controversial way.

Betting on souls like gameplay, we follow the story of the four Warriors of Light on their journey to restore light from magic crystals that monsters have corrupted.

In Stranger of Paradise: Final Fantasy Origin, we take control of Jack Garland, a man who shares the same last name as the original game’s antagonist. Along with their newfound companions, Ash and Jed, the three are believed to be the Warriors of Light from an ancient prophecy. However, the prophecy speaks of four members. Not to mention that none of the three remember their past, just that they need to end an entity that plagues their world, Chaos. During his journey, Jack teams up with other characters who share the same goal, and as the story progresses, it will become clear that his mission goes far beyond defeating Chaos.

At first glance, it looks like a typical story from a classic Final Fantasy. But make no mistake, the way this story is told may displease the most puristic fans of the franchise.

First, we could change the game’s name to Stranger of Paradise: Final Fantasy Brucutu Edition. Yes, the game’s script looks like it came straight out of action movies from the 80s/90s. Jack is a real braggart. He is short and rude in the dialogues, swears, and even interrupts those “lectures” that the villains do before facing the heroes. Add that to Jack’s bizarre thirst to end Chaos. The guy looks like the descending trapeze meme when it comes to the subject.

Jack’s companions are not far behind; they look like pirate parrots. His dialogues are limited to providing moral support to the player. “That’s it, Jack. ” “Oh, only Jack can fight like that. “. They even try to create some dialogue, but they always get cut off by Jack.

In short, everything a fan would never expect in a Final Fantasy game is present in Stranger of Paradise. A meme festival in the best B-movie style. Playing with an open mind it’s an experience that can guarantee lots of laughs. But if you were expecting something closer to the main franchise, you would surely be disappointed.

Likewise, the characters are likable… but very poorly defined. Neon, Jed, Ash, and Sophia all have a moment or two throughout the story. I like what I’ve seen from them, but there isn’t nearly enough to get me to care about anyone other than Jack. Even then, I only started to care near the end. I guess their personalities are supposed to come across through in-game dialogue, but that’s more often than not nonsensical, poorly written, and contradicts what’s going on in the story, and whatever fight is happening. For example, I could kill a whole group of enemies in a single combo without getting hit, but someone will still say how “we barely survived that” and “we’ll do better next time.” The whole game feels like it was written by aliens who have only seen Memento. Some bits of the story are out of order or misleading to great effect, but most of it just feels like it comes out of nowhere.

So if the focus isn’t on the story, then it must be on the gameplay. Thankfully, combat is pretty dang satisfying here. It plays like a more flashy Dark Souls, which makes sense given this is the same team that made Nioh. You can press Square repeatedly to perform a combo, then, at different points in the combo, press Triangle to use some MP and unleash a special skill. These skills can be anything from an overhead slash with your buster sword, readying a charge attack, or casting a spell. You can set what ability you want at each point in the combo, making this system highly versatile – especially when you mix in Jobs.

A fight of respect

As already mentioned, Square Enix is ​​not afraid to step out of its comfort zone and take its flagship franchise into unusual genres. A few worked out pretty well, like Final Fantasy Tactics, Fantasy XIV, and Crisis Core: Final Fantasy VII. Like Dirge of Cerberus: Final Fantasy VII, others are best left by the wayside.

That being said, we now have a game that goes all the way with Soulslike. Wisely, Square Enix chose to put production aside and put another studio in charge, Team Ninja. With games like Nioh and Ninja Gaiden under its belt, combat in Stranger of Paradise is frantic, challenging, and addictive. A bit punitive too, but not as much as in FromSoftware ‘s games.

The style follows the same as the Souls genre, with the strong and weak attacks, special attacks, dodge, defend and repel. To defeat your enemies, deplete their life points, indicated by a slash. However, Team Ninja has added some interesting features that give the game its own identity.

When you choose to finish, the enemy is crystallized and turns magic points to our character, thus increasing the magic bar and allowing us to use various special attacks.

To give that hint of difficulty in the game, our character also has the posture bar. When taking hits when we are defending or trying to repel them, our stance bar will deflate the fastest. Once this occurs, our character will be stunned and exposed to enemy attacks for a few seconds. Taking an attack at this point doesn’t necessarily mean your character will die, but the damage will be massive.
Remember when I said the game wasn’t that punitive? So dying isn’t going to end your whole experience or anything. You return to the closest control point, a kind of Rubik’s Cube, and your magic bar will return to its starting level. Then you will be able to recover the magic points lost in the place where your character died. If you die without recovering these points, it will be necessary to fill everything again, finishing your enemies.

You may have heard of the hack’s slash and shooting loot genres. Stranger of Paradise seems like an unusual mix of these two genres. As can be seen from this, the game has all the elements of a hack slash gameplay. Team Ninja combined this with the addictive loot system, where players need to defeat enemies to obtain valuable equipment, be it weapons or armor.

During my journey through the world of Stranger of Paradise, it felt like I was playing something like Destiny. Several missions are spread across a world map with equipment level recommendations in each of them. Trying to venture into quests with equipment levels way above your character asked for certain death. To seek out better items, you could redo story quests or opt for side quests, which also offer unique items. Defeating enemies meant a shower of equipment of the most diverse colors that indicated the rarity. Common, rare, legendary, etc., all loot feature is present.

Team Ninja has prepared an interesting class customization system to prevent the game from becoming repetitive. There are several classes for all kinds of tastes. Samurai, Mage, Assassin, and Paladin… each have equipment types, stats, and special attacks. The best part is that you can change classes at any time and, consequently, your style of play.

Prefer to confront your enemies from afar? Use a black mage with his devastating spells. Or are you one of those who prefer a more frank confrontation? A knight with high defense might be another good option. Even more impressive is that you can merge classes. By the end of my journey, I was already a white mage with special attacks of a black mage. I went on top of the enemies, and when the animal took it, it retreated to heal me and use magic from a distance, while my companions’ AI stayed in the closest combat.

Stranger of Paradise could be a big hit, but the game suffers from many issues that cannot go unnoticed. We can start with the low-quality visuals. The graphics aren’t far behind if the script looks like a B movie. The design of the settings and characters seems to have come out two generations ago. You could even argue that it fits well with the studio’s proposal to deliver a more alternative experience, but that doesn’t justify its performance issues, constant frame drops, and jagged edges throughout. The game still has performance and resolution-focused modes, but it doesn’t do well in either.

The loot, despite being a welcome mechanic, seems to be unbalanced. Virtually all enemies drop items of all rarity levels. The stop is so absurd that occasionally your inventory will be full with the number of items, and it has space for up to 500 items! Then that feeling of challenge x reward is almost non-existent. Just kill the easiest enemies until that legendary item comes out and move on.

Stranger of Paradise: Final Fantasy Origin is another bold move by Square Enix to bring the Final Fantasy franchise to new audiences. The partnership with Team Ninja seemed to pay off in delivering addictive combat with high-class customization. The game is still a meme paradise, with Jack offering several hilarious moments. But performance issues, dubious graphics, and loot imbalance hinder a game that could be featured this year. It’s a fun game with a surprising ending. However, there is no way to forget its problems and recommend it as it is.