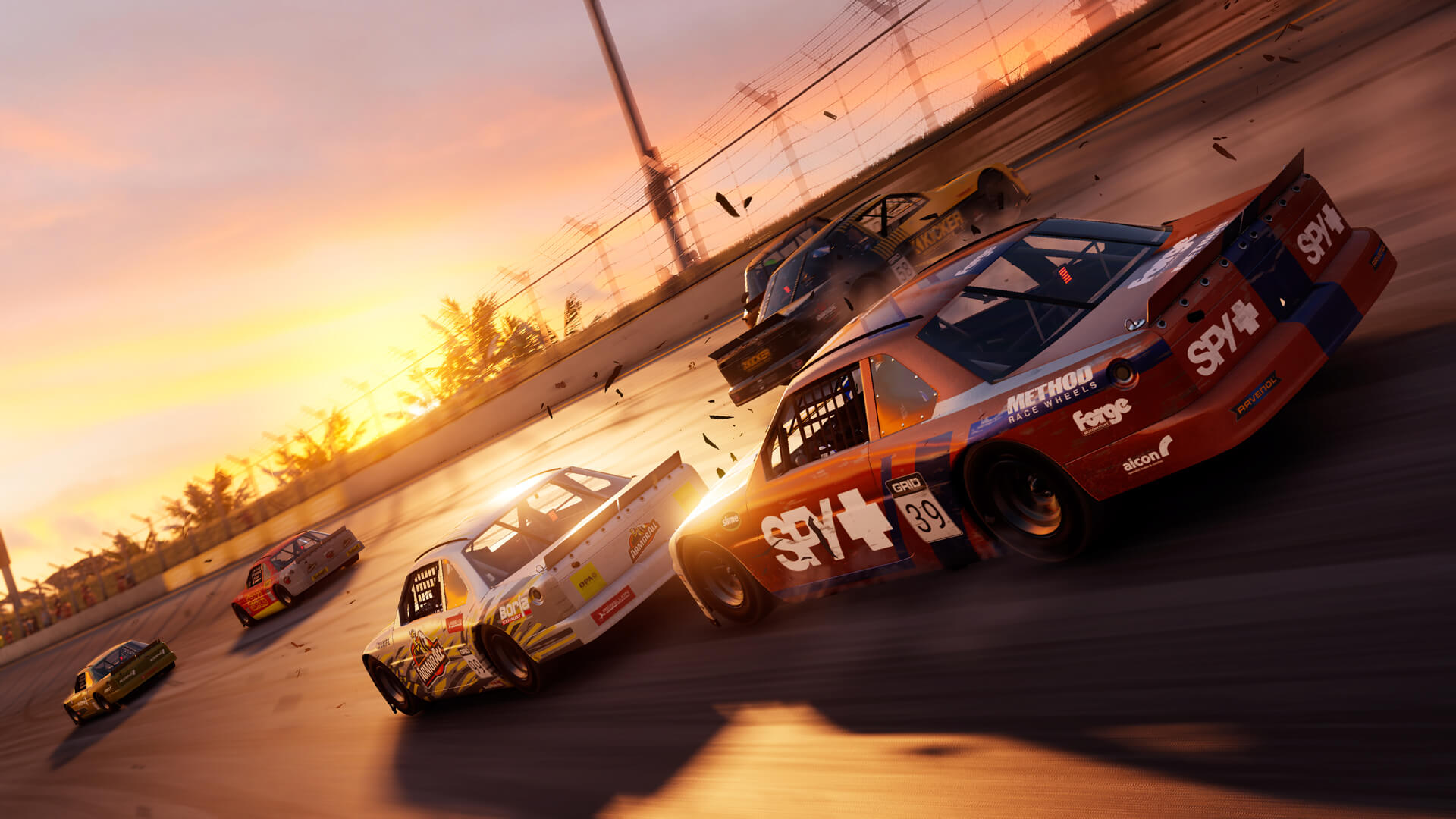 Motorsport is one of the greatest passions globally, with fans in various categories, which are divided, but which complement each other in the love of the sport. Beginning in 2008 with Race Driver: Grid, the GRID series has been a solid part of the Codemasters developer suite. Mixing different racing styles but with a historical focus on touring cars thanks to franchise origins. In games, it’s not much different, with some works becoming references for their different segments. We can mention the Forza franchise as the main “force” both in arcades and in simulators on consoles, or other franchises such as Dirt, which focuses on Rally, and F1 seeking to be a reference in its segment.

Another very important motorsport franchise, which is now back, is Grid, which after making a shy appearance in 2019, arrives with Legends, a turbocharged version of what we had in the past. GRID has shifted its focus over the years as it fluctuates between more sim-style racing and an arcade-focused approach. GRID Legends is the latest game in the series, and it has its soundtrack.

GRID Legends leans on the interim strides made at GRID for 2019, providing a great mix of car classes bundled into an arcade racing chassis. Multiplayer racers will find a flexible online presence to find the right mode for their enjoyment, while those who prefer single-player will find plenty to dive into. Among these is the story mode that brings GRID Legends into line with EA Sports’ long-standing franchises.

The game begins with a slick cutscene of two racers duking it out at the new fictional race venue Strada Alpina. They collide, with Seneca Racing’s driver Yume Tanaka out of the race and Ravenwest’s Nathan McKane seemingly at fault. This story mode is called Driven to Glory, and the name similarity to the real world F1 series Drive to Survive is not a coincidence. The player takes on the role of a rookie driver with Seneca Racing and is being followed by a TV crew capturing this exciting season via garage footage and interviews with the major personalities of the sport. It’s extremely cheesy and an awful lot of fun, with each snippet of live-action video helping to frame the player’s status in the championship and the tasks required for the next race.

One of the points that most caught my attention in Grid Legends is its interesting career mode. In addition to the fun races, we have a nice script with some surprises during our journey, which were created with great care by the developer.

We follow the story of Marcus and the Seneca team, who are looking for a new driver to join their team, but nothing is ever that simple, and it’s up to you, the new driver, to follow a new path to glory. Marcus is a very interesting character, as are the other pilots, full of personality and some clumsiness in their performances.

All scenes are filmed in live-action and look like a great documentary about the Seneca team and their rise. It’s cool to see the outcome of the entire season and the dramas that surround the entire team and its competitors.

One of the downsides I found was that no matter your rank, the animations are the same, whether you complete the minimum objective or win first. So there are moments when it doesn’t make sense to have tension if you’re doing well in the championship.
The campaign time is quite satisfying and introduces the player to each type of race well. As soon as we finish our journey, we can go to the categories traditionally, something that escapes from the career dynamics.

AN INFINITY OF OPTIONS

Grid Legends also has separate categories with various modes, including circuits, elimination, electric cars and much more. These categories can be accessed independently of the campaign mode, something I did later and was very interesting, mainly because this model has a higher difficulty. The number of races is quite satisfactory, and the learning curve of the categories increases in difficulty as we move up in the category.

Not all race types are allowed in the starting categories, so advance to the possibility of having a greater challenge. Most races are unlocked by winning races, while others require the use of certain vehicles. Another difference to career mode is that we can choose our car. This is pretty cool because we can buy and manage different vehicles for different situations.

The garage is an important part of our journey, and Grid Legends manages to satisfy car lovers with a wide variety of vehicles, separated by categories and styles. Each vehicle can also be improved through upgrades purchased with in-game coins. Remember I talked about some clues that need to be unlocked? Using a certain vehicle a lot unlocks upgrades and consequently the tracks that have this requirement. We can also customize our team with colours and even emblems, which doesn’t change the final experience much but is an interesting additional feature.

AN ENGINE FROM THE PAST

Grid Legends suffers from problems left over from the past. Choosing to reuse the engine also brought problems, such as an outdated and unstable graphics engine. The most serious I found were the drops in frames; even playing on an Xbox Series S, I had considerable drops. Some friends have also reported the same issue on Series X, so it’s the developer’s sole fault.

Another problem that bothered me was physics, where the car hits a wall, and we don’t feel that impact and braking, which does not pass the experience of stopping a car at high speed. For most of our journey, we have had a good racing experience, but these points could be improved to be more realistic.

The graphics are nice, but nothing extraordinary, with basic lighting and shadow effects. Cars don’t crumple as they should, so it lacked a little whim in this regard. The track designs are very close to some well-known tracks to motorsport fans so that you will feel right at home for many moments.

The sound fulfils its role with a characteristic soundtrack of racing games, with something that doesn’t steal the stage from the effects, which are quite simple. Grid Legends has Brazilian Portuguese subtitles, which helps in immersing the campaign mode. As we have some dialogue during races, it’s nice to hear the team manager’s advice.

Grid Legends also has various modes presented during the campaign and matured in the traditional modes. We have a difficulty that increases according to the advanced category.

Then it prepares the player for the meatier parts of GRID Legends. Career mode takes the player through different stages of the driver’s journey, starting with beginners and working their way up, and has plenty of challenges to complete to move on to the next level. It feels closer in scope to the likes of Forza or Gran Turismo than some might expect from a traditional GRID experience, less in terms of broader results and more about performance in fewer races, making it look a bit piecemeal but still powerful enough to keep the player going.

In part, this is down to the racing itself, which dives further into the arcade side of things – so those expecting something more simulation-based should be warned before getting GRID Legends. As far as arcade-leaning racers, this is a very good one, however, with a fantastic sense of speed and intensity that never really lifts, while its Nemesis System creates extremely aggressive AI opponents if the player has an on-track clash. Not all of its categories are made equal, with 4X4 racing feeling too floaty to be particularly satisfying, but it hits the mark overall.

Grid Legends is a good option for those who enjoy more casual racing games and don’t care about more advanced assist settings. The campaign mode is a great differential, where we have the journey of the Seneca team, led by Marcus, a professional who seeks to establish himself in motorsport. We assume the position of the pilot of the team, having to deal with several dramas, which are experienced in the day-to-day of those professionals.

GRID Legends is a lot of fun overall. Its story mode is enjoyable pulp drama, while the minute-to-minute racing is genuinely exhilarating. It may feel a little limited overall for those who want a deep racing experience, but players who go in expecting something breezy will find plenty to love here.